After a devastating car wreck, British actor Jim Tavaré was left in critical condition. According to Fox News Entertainment, Jim’s wife Laura stated, “He’s currently in ICU intensive care”
“He has 15 broken ribs, fractures in both breastbones. Also a punctured lung, multiple breaks in his right leg, and a broken neck.”

Now, as he continues to heal his body from the car wreck, Jim — who is known by many for his role as The Leaky Couldron’s landlord, Tom, from the Harry Potter movies — gets a special surprise at the hospital.

In the video below, posted on March 20, 2017, Jim is wheeled out of the hospital by a nurse. As he rolls through the automatic doors, he is immediately hit by the sunshine.

They approach a small, fluffy dog named Mr. Kippy, who was with Jim during the wreck. 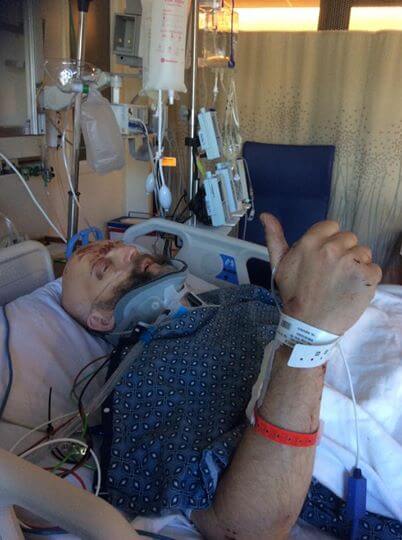 This is Laura here. Now that his family have been informed, Jim has asked me to let you all know that he was involved in a serious car accident yesterday, a head on collision. He’s currently in ICU intensive care. He has 15 broken ribs, fractures in both breastbones. A punctured lung, multiple breaks in his right leg, and a broken neck. He’s had 2 blood transfusions so far and is about to go in for his first surgery. This is for real, not a movie role. Please hold some good thoughts for him as he fights his way out of this.

Dog Was Told To Bring The Cat Home

He Sees A Dog By The River, Quickly Grabs A Camera To Capture The Most Adorable Moment Ever

A pet store replaced all its animals with rescued ones for the day. This is what it captured