Paige King is a shelter volunteer at Fort Worth Animal Care and Control. She spotted a tan mixed breed dog trembling in his cage; she knew she needed to do all she could to help him. Neno was his name, and he ended up at the shelter because his owner could no longer afford to care for him. 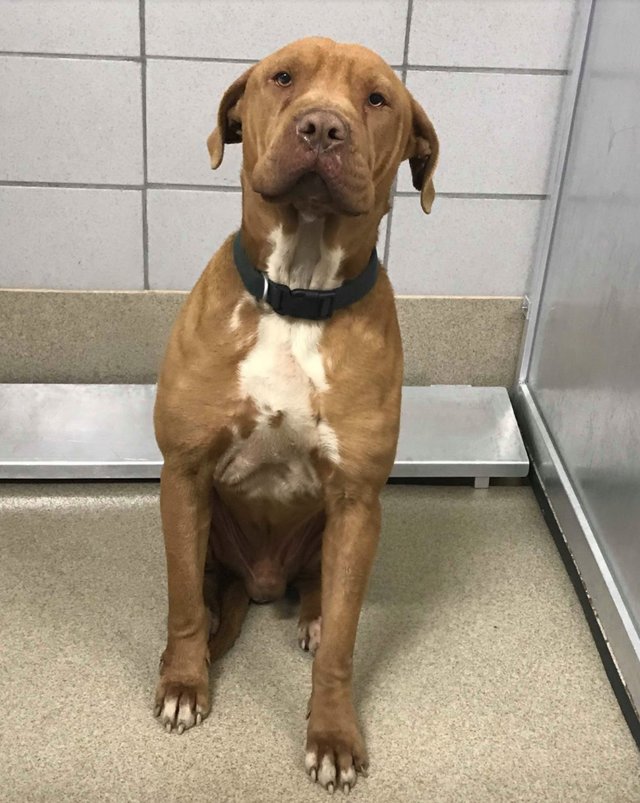 Paige took a video of Neno in his kennel and posted it on social media. The response was instantaneous. It was viewed and shared over 200,000 times. “ He was terrified,” King told The Dodo. “He was sitting still in the middle of the kennel with his legs tucked so tight. He would turn his head sideways to avoid looking at me.”

Laura Rogers was one of the many folks who commented and responded to it. “The moment I saw his video, I cried,” Rodgers told The Dodo. “I could not get him out of my mind. That video moved me that much.”

The next day, Rogers got in her car and drove over an hour to see Neno. “I don’t think I could have lived with myself if I didn’t know he was out of there and safe,” Rodgers said. “There were many people commenting on the Facebook post saying they wanted to adopt him, but 24 hours later he was still there.”

A shelter employee told her many people dropped in to see Neno, but they decided he wasn’t the right fit for them. Rogers walked in and went straight to his cage. She coaxed him outside his kennel and then shot this video.

“First time we took Neno out of his kennel at the shelter,” she wrote in the caption.

The pup’s trembling and shaking subsided. But Rogers wondered if he could have some neurological issues because he was weak and wobbly on his paws. This didn’t bother her one bit; Neno was going home with her. “He’s the kind of dog who fits in my wheelhouse,” she said. “A dog that needs love, time and attention. I could see why other people passed, but for me, Neno was a perfect fit.”

When she brought him home, Rogers took Neno to the vet and discovered he had a host of problems. He was anemic, which could’ve been caused by the nasty tick infestation he’d acquired. He had an underactive thyroid and a case of heartworm. No further neurological exams will be conducted until Neno’s health is stabilized.

Rogers suspects Neno was an outdoor dog who might have spent much of his time on a chain. He had many pressure sores on his body. Neno is now more relaxed and happy; he was still unstable on his paws, but as he kept walking this diminished.

The pooch became an instant hit with Rogers family; he loves hanging out with his canine siblings and giving kisses. And we can’t forget to mention how much he loves watching the ducks on Rogers property.

Rodgers is thankful Neno’s former owner brought him to the shelter. “I don’t advocate for people to surrender their dogs because they can’t afford to care for them,” she said. “But until we, as a society, come up with a better alternative, in this case, going to the shelter saved Neno’s life.”

Because of his popularity, she created a personal Facebook page for Neno. “I know a lot of people were very worried about him, and I wanted them to know he is OK,” she said. “I am sure many were like me, so haunted by the video. I see hundreds of dog videos a day. For some reason, his really hit me hard. He is a special boy.”

King is thrilled her video led to Neno finding an amazing home. “I had no idea it would blow up like it did,” she said. “I hoped I’d get five shares; it was crazy. He looked so sad, and now he is such a lucky dog.”

Rogers hopes Neno’s social media page will inspire people to adopt a shelter dog. “Even if you’re not up for [a] challenge like Neno, I promise, there’s another dog in a shelter who will fit your lifestyle,” she said.

She promised Neno: “Wherever this journey takes us, we will all go together. He is here for life; he is not going to go anywhere.

“He is truly a spectacular dog,” she said. “Every day he amazes me in the improvements that he makes, and all the love that he shows. He has taught me so much about forgiving and just opening your heart.”

Dog Was Told To Bring The Cat Home

He Sees A Dog By The River, Quickly Grabs A Camera To Capture The Most Adorable Moment Ever

A pet store replaced all its animals with rescued ones for the day. This is what it captured