This is great, A musician performing in the street was ignored by everyone. Instead of stopping and leaving, he decided to try one more song— and that’s when he got a little surprise… Check it out… 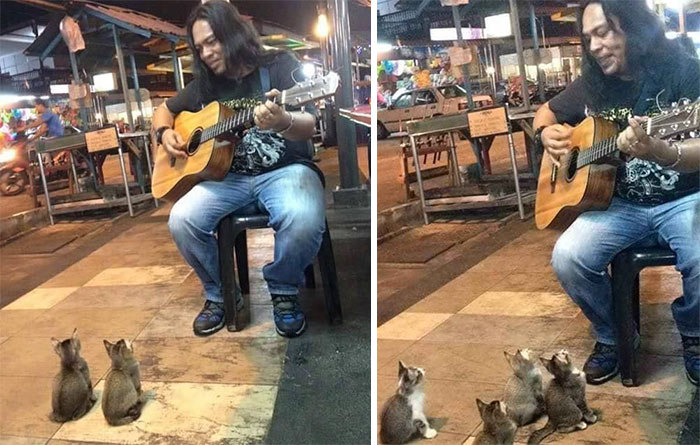 A Malaysian busker was feeling particularly rejected one night when he was busking and no one was paying any attention to him.

The long-haired singer had been out with a friend, performing for what seemed like hours, and he was just about ready to call it quits. There was no point in wasting his time if nobody was going to appreciate his skills. Instead of packing up his stuff and leaving though, he decided to try one more song— and that’s when he got a little surprise.

The man’s friend, who uploaded the video to Facebook, explained, “My friend had just finished busking on that night but not many people heard him sing. He was feeling upset, then he sits and relaxes and sings the song just for fun.”

In the video, you see 4 three-month-old kittens walk up to the singer and plop themselves down to enjoy the show.

“Suddenly the kittens (3 months old) come and sit in front of him. It’s like [they] know his feeling and give him support.”

Why Do You Repeat After Me?

Kitten walks up to women on street, begging for someone to help him

Woman Thinks Cat Died In Wildfire. Here’s The Tearful Moment They Find Her In The Ruins

Women gives cat a teddy bear to snuggle with, but when he opens his paws out, she starts recording it